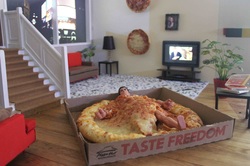 The 'fluidity' of sculpture (a non-binary approach)

Robert Marshall has recently completed a masters at the Royal College of Art. Throughout his years of study he has been interested in the journey of sculpture and what lies at its borders. He originally worked in the medium of stone but has been intrigued in the way sculpture has spilled over into a plethora of mediums including film and digital mediums. Because of this his sculpture now uses any material (or immaterial) he deems most appropriate to highlighting an intellectual pursuit. His latest essay titled ‘Is sculpture becoming noisier in the Information Age?’ highlights among other things the diversity of this genre.
Such examples of Marshall's work include a 4 meter high temple of his own consumed rubbish in his 'Pursuit for Happiness'; becoming half man, half Artificial Intelligence machine, has achieved the impossible and carved chalk into cheese; invaded an island off the coast of Dorset and declared it his own; and has even built a gallery within a gallery to expose its conceptual parameters. Using fine art as a tool he has experimented in the designing of sentimental machines, developed spectacles that give proprioceptive capabilities, designed helmets that give 340 degree 'pigeon' vision; converted London road traffic into a musical score, and a developed an exercise machine that resonates to the space within its environment.

His latest works experiment with the concept of 'fluidity' and non-binary thinking, exploring not only the space within two opposite poles but also beyond the set 'parameters' and into the extremes. One such body of work explores the medium of paint as sculptural material and paint as structure and form (by using the ‘scabs’ that form in the tins of old household paint pots to make a sculpture and push this form to its extreme, in some case layering thousands of ‘scabs’ on top of one another to achieve freestanding forms of pure paint!).


Taking sculpture to the edge for Marshall, is not only a form of critical analysis but also an appreciation by someone who is in awe of its journey, its history and of what sculpture has become and what it could become; from its ability to hold beauty, the understanding held within material. and its inevitable draw towards digital and the virtual.